International Security: An Agenda for Rethinking 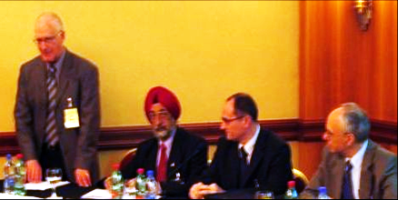 The following is a report on the NATO Advanced Research Workshop held in Zagreb, Croatia, November 16-20, 2005, concurrently with the General Assembly of the World Academy of Art and Science. This international workshop followed a preliminary meeting in Washington DC in September 2005 in which the major themes were initially developed. The workshop focused on three major areas of security concern to the international community: terrorism, international peacekeeping, and nuclear weapons. This report synthesizes the main points brought out in the Zagreb discussion, although it inescapably also reflects the writer’s perspective on the subject matter. After an introductory word on the meanings of security, the reported discussion of the three subjects follows, consisting of some general propositions and proposed policy actions. The ARW participants constituted a multinational group with varying premises regarding the meaning of security. To some, security connotes strategic stability through maintenance of the status quo in regard to nuclear arsenals and acknowledged possessors. To others, security meant elimination of all nuclear weapons. Still others think of it in terms of substantial reductions. The same difference of perspective exists in approaches to international military forces. Some participants see international security advanced by spreading democracy, others cite evidence that the process of democratization creates instability. The environmentally-minded define security in terms of pollution and global warming. Despite these differences, consensus emerged on some desirable courses of action.

Terrorism is generally defined as a menace emanating from non-state cells and networks with no return address, which makes inapplicable traditional defense responses. Deemed equally inappropriate is any revival of isolationism, since involvement in distant places is now essential if we are to be safe at home. The principal differences were over assumed sources of international terrorism, to wit:

Like most people, we had no dazzling prescriptions to offer on countering terrorism that others may not have thought of. However, the group surfaced several useful insights:

The new conflict agenda substitutes for war between states the category of civil strife, including humanitarian disasters, crimes against humanity that offend the civilized world, failed states requiring nation-building operations, and other novel additions to the diplomatic armamentarium This change takes place in an environment of human rights activism including a growing number of governments. In this atmosphere, "peacekeeping" has come to imply not just neutral blue berets interposed between warring parties who have agreed to stop fighting, but civil governance operations as well as quasi-military missions that might be better called "peace enforcement". But peacekeeping, however defined, still tends to be reinvented with every new crisis. Troop contributors are hard to find, and it is astonishing that the problem of adequate training and discipline is the same as it was 40 years ago Some UN peacekeeping missions have been successful. But the record of other efforts, like that of the political UN itself, is a mixed one. International peacekeeping has become indispensable before it has become truly effective.

Despite international treaties and other national and bilateral efforts to curb nuclear proliferation, the barriers are weakening, even as approximately 27,000 deliverable nuclear weapons, most in the hands of the US and Russia, remain in the arsenals of the nuclear weapons powers. Bomb effects experts would have little trouble agreeing that one-tenth that number would be enough to destroy the civilized world, and one-hundredth that number more than sufficient to end the life of several major world metropolises... Of the three topics considered, this is clearly the most dangerous, difficult -- and imperative. Much attention is given to curbing nuclear proliferation, including recent steps to intercept illicit shipments.But neither sanctions nor obloquy stopped India and Pakistan from actually deploying, nor North Korea or Iran from building or pretending to build. As for the acknowledged nuclear weapons powers, no serious negotiations on reducing (let alone eliminating) inventories of weapons or fissile materials are visible. The situation is one of stagnation, which for several reasons does not equal stability. Earlier predictions of inevitable use (for example CP Snow) happily did not transpire. Nor did President Kennedy's prediction of 20 nuclear weapons powers by 1970, although the NPT is now failing to plug expanding holes in the nuclear dam. One new pair of proliferators -- India and Pakistan -- are still technically at war over Kashmir. Israel, estimated to have between 100 and 200 undeclared weapons, faces a nuclear-bent Iran which speaks openly of destroying Israel. Of the declared nuclear powers, Europe is stable. But accidental launches are not impossible in the deteriorating Russian command and control system. China and the US periodically look into the abyss of a potentially nuclear encounter in the Taiwan Straits. Perhaps the most daunting concern is acquisition by terrorists of a atomic explosive device smuggled in a suitcase or container, designed with Internet help, and unstoppable by an ABM system. A growing number of former high government officials and military chiefs in the US argue publicly for complete abolition of nuclear weaponry. Some others urge "almost complete" abolition on the grounds that, short of universal brain surgery, the memory of how to build a nuclear weapon, facilitated by the Internet, might leave a disarmed country defenseless against a threat of use. To the “almost abolition” group it is essential to maintain minimum deterrence, seemingly confirmed when North Korea announced that it possessed nuclear weapons and the US softened its tone. It has long been evident that it is uncertainty, not certainty, that deters. There is no shortage of private proposals, NGO advocates, UN resolutions, and religious injunctions, to break the stalemate under which nuclear arsenals are built, maintained, and updated even in the face of a broad global consensus that stockpiling such weapons is not only immoral but wholly irrational in any realistic political or military calculus. There are precedents for national and collective action to ban use of other morally repugnant – and mutually harmful – weapons of mass destruction. The Chemical Warfare Treaty of 1925, abided by except by Saddam Hussein’s Iraq, was grounded on the harsh experience of World War I. The Biological Weapons Convention of 1972 banned production or use of biological weapons, and President Richard Nixon, deeming that the value of biological weapons was far less than its costs, shut down the American program. In the preliminary ARW Washington meeting, former US Defense Secretary Robert McNamara restated with passion the military inutility of nuclear weaponry, echoing former US national security adviser McGeorge Bundy’s earlier assertion that, on the record, it was totally inconceivable for an American president, even the face of overwhelming threat, to actually launch nuclear weapons. Indeed, presidents and military leaders around the world have said much the same -- after leaving office. The problem is that while in power they seemed paralyzed from trying to change the equation. For its part the military. while in uniform. naturally follows SOPs. Meanwhile public discussion has virtually ended, and at least two generations have grown up without the reality check provided by publicity on nuclear weapons effects The problem is obviously systemic, in that failure to make more than marginal changes in an irrational program is built into organizational and bureaucratic behavior. This means that action will be taken only when the decision-making culture changes. In the light of all these daunting realities, what steps might be useful to help persuade governments to act on the realization that their nuclear arsenals (or ambitions) are really irrelevant to their security needs?

Funding for this workshop was provided by NATO and The Mother's Service Society, India.